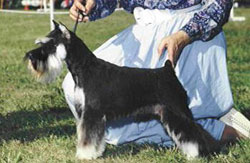 Wanting an outcross to breed to Leo and to also bring the Black & Silver colour into our line, we imported Solo from Marcia Feld of Illinois as an 8 week old puppy.

Solo quickly became the "Princess" (heir apparent) to top house dog status, worming her way into our hearts and lives.  Shown as a precocious puppy, she earned her Canadian title quickly.

Solo bred to Leo gave us Am Can Ch. Empire's Indigo Moon ROM "Indi", a beautiful dark salt & pepper bitch who has so far given us four lovely Champion offspring to continue with, 2 males & 2 females.

We are now working with Solo's 4th generation descendents.  Two of her great-great grandaughters have been retained as show prospects and will hopefully be shown in 2005, one a black, a first for Empire, the other a black & silver.

At 13+ years of age Solo is doing quite fine thank you very much and still ruling the roost with an iron paw.